A cookie is information stored on your computer by a website you visit. Cookies often store your settings for a website, such as your preferred language or location. This allows the site to present you with information customized to fit your needs. As per the GDPR law, companies need to get your explicit approval to collect your data. Some of these cookies are ‘strictly necessary’ to provide the basic functions of the website and can not be turned off, while others if present, have the option of being turned off. Learn more about our Privacy and Cookie policies. These can be managed also from our cookie policy page.

IE10 and below are not supported.


About the Capital Improvement Budget

What is the capital budget?

The Capital Improvement Budget (CIB) is how we fund the construction of maintenance of City infrastructure. This includes improvements in streets, bridges, libraries, parks, recreation centers, and other public facilities and infrastructure. The budget is composed of a variety of state, federal, and local funding sources.

What is the process?

The CIB budget is approved by the Mayor and City Council annually. In 2019, we launched a new CIB process, designed to replace the over three decades old existing process and focus more strongly on equity, strategic investments, and fiscal responsibility. One of the most significant changes to the process is the creation of a two-year cycle with the first year dedicated to City department-submitted projects and the second for community-submitted projects, eliminating the competition for funding between City and community projects that existed in the previous process.

Year 1 (2019): In the spring of the odd calendar years, a cross-functional working group composed of representatives from City departments and the CIB Committee begin to review project proposals and 5-year plans submitted by City departments. When project review is completed, the working group forwards their project and plan recommendations to the CIB Committee. The Committee reviews, discusses, and holds a public meeting on the recommended plans.

In the fall of the odd calendar years, the Mayor announces City priorities for the following year.

Year 2 (this year): The City and CIB Committee begin recruiting applications from the community. In the spring of the following year, the cross-functional working group screens submitted applications for eligibility. All eligible proposals present to the CIB Committee. Online polling provides additional data that the CIB Committee may use while considering which projects to recommend. 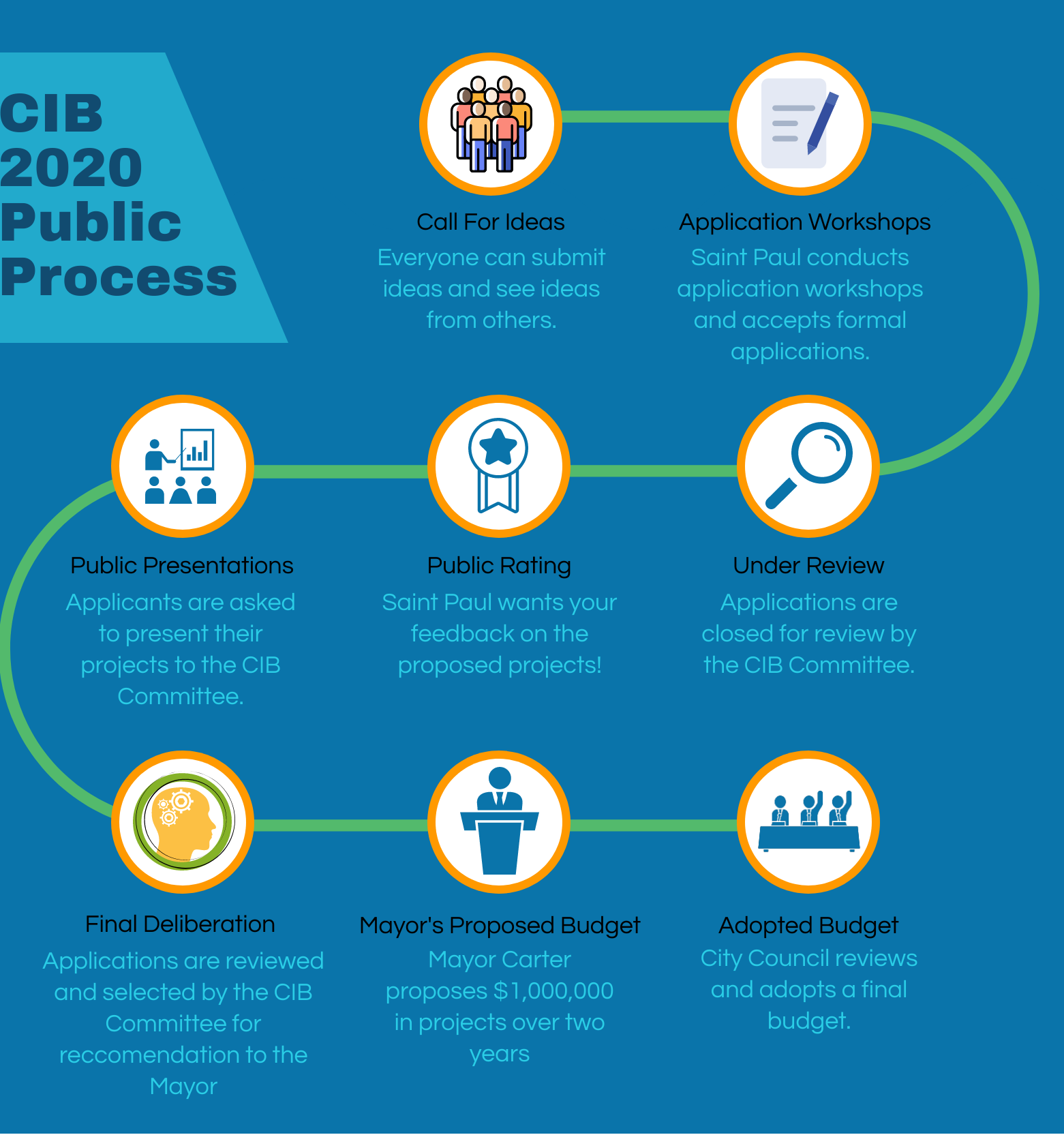 In both years, the CIB Committee forwards recommended capital improvement budgets for the following two fiscal years to the Mayor by late June. The Mayor proposes capital (and operating) budgets to the City Council and citizens in mid-August.

During the fall, the City Council reviews the Mayor’s proposed budgets and holds public hearings. In mid-December, the Council adopts a final capital improvement budget for the next fiscal year and approves a tentative budget for the year after.

What are the restrictions?

In order to be funded, projects must meet the following criteria:

How much is available?

How will I know if my project has been chosen?